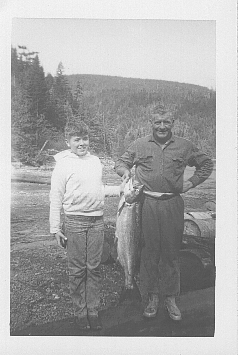 Dad and I with dinner.

We ate well. The following links are to some of my favourite dietary supplements.


Coho Salmon- this was my favourite fish. I caught these as bluebacks and coho just before running up the Quatam River in Ramsay Arm. To my mind, these fish are the best light tackle sports fish, because they can fight spectacularly in the shallow waters near the river. We often caught these on two or three lines at once. Here is another view of this lovely fish.
Spring Salmon - we always ate these fried as steaks. My father prized this over all other fish. Bob Grey caught the largest one I recall, 50 pounds. My largest was 15 pounds, my father caught one 34 pounds, but claimed larger ones before I was born. Tbey go by a variety of names; spring, chinook, king and Tyee. The latter name is reserved for the fish as it is preparing to go upriver to spawn. 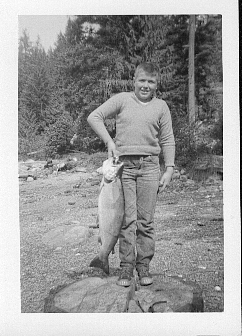 This picture is of the largest spring I ever caught.


Lingcod - delicious filleted, cooked in batter with chips. When we wanted this, we told my mother to heat up the cooking oil, and get the potatoes peeled. We caught them anytime we needed one.


Bert Ganson and I show off a day's catch of cod. The fish with the pot-belly is a female, large with roe. We never ate fish eggs, but I am told some people cherish them as a delicacy. Ganson worked for the Whittingtons, but fished with us. We were quite good at it. He is now a farmer in Alberta. 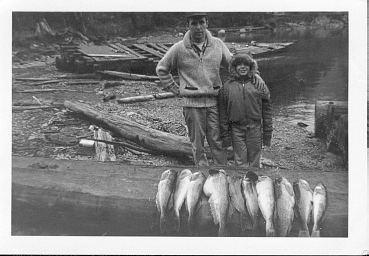 Rarely, we would catch red snappers, which were delicious.

There was a bay (Owen Bay) on Sonora Island with a broad flat bottom, excellent for catching crabs. We would take a boat up there to catch a wash tub full, and cook them right in the tub, over a wood fire on the beach.

Oysters and clams rounded out the menu from the waters and shores. While I lived on the island, I never tried sea cucumber, though we snagged hundreds of them over the years of jigging for cod. I tasted sea cucumber when I was visiting friends on Gabriola Island, and realized I had missed something. The sinews that line the case are quite tasty.

We never bothered cooking the many rock cod we caught. We would toss them back. Years later, I tried it at a Chinese restaurant on Hastings Street in Vancouver, and realized our release program was a mistake. If you get a chance, eat them.

My father was a good hunter, and we often enjoyed venison. The best treat is deer liver, still warm into the frying pan. Picture quality is not good here, but there is a three-point buck on the ground, Dad standing on the left, Red Kretz kneeling on the right, and Gary in the background. 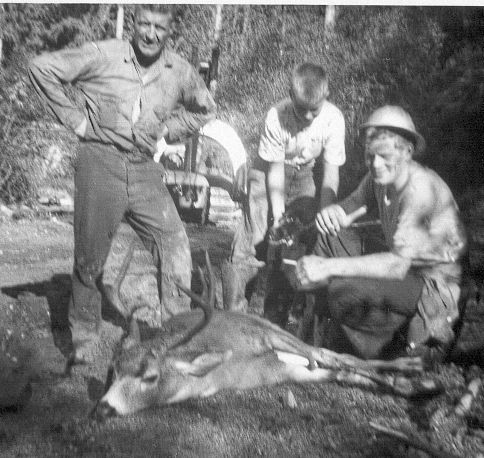 My own career as a hunter was short-lived. There were plenty of guns around. My father hunted with a Winchester 30-30, Bob Grey favoured a .222, there was a Lee Enfield .303, and a small collection of .22s and an ancient shotgun rounded out the arsenal. We used the .22s for target practice, and I became reasonably good at shooting tin cans.

Animals were a different story.

I often accompanied my father while he hunted, but I only went hunting, armed and ready, with him once. I saw a deer, and managed to get a shot away. To this day I do not know if I wounded it or not. It got away, and I was worried about it for days afterwards, not knowing if I had injured it, and it had died uselessly or whether I had missed entirely, and it had lived, warily, to a good old age. My next, and last adventure, as a hunter saw me return with the quarry, in this case a blue grouse, cleanly shot. My father and mother congratulated me, and instructed me in the art of cleaning the bird. I was long used to cleaning fish, so I was not the least bit squeamish about the task. I soon discovered, however, that bird entrails smell rather different than fish. I nearly gagged as I struggled through the task, but returned with an adequately cleaned bird. I then learned I was also going to eat the bird. It was difficult, as the memory of the smell kept coming back with every mouthful.

Fresh fruit in season was abundant. There were many abandoned orchards in the area, so in the fall we would pick cherries and apples on the Rendezvous Islands, apples at the Redfern's old place in Surge Narrows, and pears and cherries from an orchard up near the Oakasalla. Blackberries were a personal favourite, and most the old orchards had huge blackberry bushes. Salmonberries and what we called "bear candy", the tender new canes of the salmonberry, were quite delicious. My mother made great huckleberry pies. The trick with huckleberries is to pick the same bushes year after year. The berries seem to get better each year.